Home » Cat Facts » Why Does My Cat Bite Me When I Pet Him?

Sitting on the couch with a cat in your lap is meant to be a time for zen. Kitty purrs as you scratch their back. But then it happens. Just when everything seems to be going oh so well your cat turns and starts chomping on the hand that pets him.

What is going on here? Why does my cat bite me?

Not only does he bite but then he’ll turn around and lick the wound.

Cats bite for many reasons. From loving affection to an aggressive “No!” Knowing why your cat is biting will help determine the behavior and make your lives together more tolerable.

The Tiger and The Cat (Jekyll and Hyde Petting)

What we described with Miles above is called petting-induced aggression.

Cats are not dogs. Sometimes you can pet them too much, and then your cat is overstimulated. It’s the equivalent of someone massaging your shoulders until you say “Ouch!”

Since cats don’t know English they have to use whatever language is available to them. That might mean a scratch, a flick of an ear or the tail, a turn of the neck, or a harmless bite.

Petting Limit Behaviors to Look Out For In Your Cat

If you pay attention to your cat while you’re petting them you may be able to spot some behaviors that indicate they’ve had enough.

If you catch one of the above behaviors your cat is saying enough! So, stop petting.

That way you end the petting session on a positive note.

In the mornings Miles presses his nose against my arm and then he nibbles away. It’s his good morning “Hello.”

It’s a welcoming nibble in the morning. A nice sign of affection.

Your Cat Wants Something Else

Now it turns out that what Miles doing may not be purely driven by affection. We’ve learned that Miles nibbles at us when he doesn’t get his food on time.

Or, when his belly is grumbling. Which is nearly every morning.

What we thought was playful affection turned out to be a bit of a demand.

It’s tempting to play with the cutesy kitten that’s just become part of your family with whatever is available. That includes your fingers. Well, this is a big don’t do that. Even if it doesn’t hurt.

By letting a kitty chomp on your fingers—even when it’s for mutual fun—you’re setting up a behavior that says, “It’s perfectly fine to bite flesh.”

Instead, use toys! Especially ones that keep your hands at a distance like a fishing rod toy.

If your kitten does bite don’t get aggressive. Simply stop playing, stop moving, don’t react. Your cat is waiting for you to move like a mouse. Don’t give it to them.

Stay still and ignore your cat. Then go back to playing once your cat has calmed. That way you don’t set up biting as a part of play, but as a reaction that will cause play to stop.

As nature’s predators cats want to protect where their vulnerable. That means the stomach, where all those vital places are.

Start poking the belly and your cat will likely go all-out defense. It’s not meant to be aggressive. It’s an instinctual reaction that says, “Hey! Don’t pet me there!”

Other Reasons To Bite

Just Not in the Mood

As with people, so with cats. Maybe you’re just misinterpreting your cat’s mood. And what seemed like a time for petting was really a time for something else.

It happens. Your cat may have wanted to play instead.

Every cat communicates in their own way. Some mew, others stretch their claws into your shirt. And then others bite.

Your cat may simply be looking to play. And the only way they know how to get you to throw the toy  mouse is to nip.

If your cat has suddenly become aggressive it might be time for a visit to the vet. There may be an underlying issue causing your cat to lash out.

Since we’re talking petting it may be that there’s a tender spot on your cat’s skin. And they’re lashing out because you’re grazing it. This is particularly true of senior cats who may be suffering from arthritis or similar pain.

Does Your Cat Bite and Lick You?

Does your cat bite and lick to show affection? Or, maybe they’re gently biting for some other reason: a treat, to play, food? (Let us know about this last one since we haven’t seen it mentioned anywhere else.) 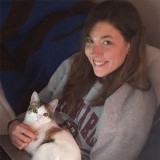